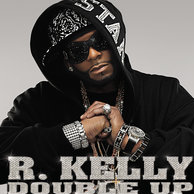 R. Kelly starts off his new album with “The Champ” and it is clear that he has a lot of anger and aggression he is trying to get off his chest. He has been through a lot of drama and fallen in and out of grace over the past few years…but he seems to fail to realize that he brought all of it on himself. For someone to be on trial for child molestation charges…he should be more grateful that he is still getting to do what he wants to do and make tons of money at it; and have less contempt. At any rate…unless you’re in the mood for hearing Kells act like he’s a victim then skip it.

Next up is the song “Double Up” featuring Snoop Dogg. This is essentially the average rap song but with singing. Isn’t Kells 40 years old? Why is he still talking about picking up women and being out at the club? Grow up man! Snoop adds a verse to the song and I can’t deny that the two have good chemistry…but he isn’t talking about jack either. The singing is very lazy, the production is ok; overall this song is maybe a 5/10.

On “Trying to Get a Number” R. Kelly collaborates with Nelly and manages to make an incredibly corny song. All I’m going to say about this…are they really serious? No seriously…seriously

“Get Dirty” featuring Chamillionaire is along the same lines of the other songs…clubs, women, drinking, spending money, yadda, yadda, yadda. The production is blazin and it’s not often that we hear a dirty south sound from R. Kelly. I could see this being a real club banger.

R. Kelly channels T-Pain with some computerized vocals on “Leave Your Name”. The song is basically about his answering machine message where he says he will get back to you if he isn’t having sex, smoking weed, not faded, or making a baby. A new low in lyrical content Kells…way to go.

I really like the production and the singing on “Freaky in the Club”…but you know what? This would’ve been a great stepping song if he would’ve put an ounce of effort into making the song have an ounce of substance. Nonetheless, this is a really catchy song and isn’t as bad lyrically as the other songs. I actually like this one…it’s sad to say this on a song called “Freaky in the Club”…but does this mean there is hope for the album after all?

“The Zoo” proves that R. Kelly still has some creativity left. I’m on the fence about whether this song is totally ridiculous or pretty good. I like the production and his singing is cool…but making animal sounds and including sounds of elephants and birds is just f*&kin bizarre! lol.

We all know and love “I’m a Flirt” so…moving right along.

Up next is “Same Girl” with Usher…which gets back to the root of R. Kelly’s strong suit: telling interesting stories. On the song R. Kelly and Usher discover that they are both seeing the same woman. I like the back and forth of the song, the production is good, and they both sound great.

“Real Talk” shows that R. Kelly is a man that just looooves drama. In the song, R. Kelly is going off to his lady defending himself from allegations of cheating. If you ask me…he sounds like he is guilty but just making every excuse under the sun to cover up his actions. The problem with Kells is…he spends half the album talking about how he’s a flirt, player, partier, etc…and then turns around and does a song like this and expects the listener to be sympathetic. The f*&k outta here! Anyways…he sounds really trifling on the song with how he’s cussing the woman out, calling her out of her name…just ridiculous. All I can say is, “I wish a *&^(%$@ would!” lol.

On “Hook It Up”…R. Kelly talks about telling his homie’s girlfriend to hook him up with someone like her. The speaking intro of the song starts off a little suspect, but the song turns it around and comes off on a mildly positive tip. Huey guest stars on the song and he actually contributes a nice verse…I’m shocked! I think this is a song that a lot of people will like.

“Rock Star” features a blazin hot verse from Ludacris and guest appearance from Kid Rock. But damn…how many songs does Kells really need about smoking, drinking, and hooking up? Sh!t is getting beyond monotonous at this point. With that said…the rock vibe of the song is hot!

“Best Friend” features Polow da Don (who should never rap again) and Keyshia Cole. This song is a complete disgrace to R&B music! First of all…R. Kelly really shouldn’t have a song about a man talking to his girl and best friend from jail when he’s on trial for serious charges. Secondly…why in the hell would someone seriously want to sit phentermine without prescription around and listen to this kind of garbage? Has music deteriorated to the point to where we’re expected to be interested in the fact that the jail-bird’s toilet paper is “cutting his ass”? I mean seriously…earlier when I said “Leave Your Name” was a new low in lyrical content for Kells…I spoke too soon…THIS is officially a new low.

I’m soooo sick of this album at this point, so I almost threw up a little when “Rollin” came on…because I just don’t know if I can take any more of this b.s. he is trying to pass off as R&B. This song is overkill since he already covered this same lyrical content in the intro of the album. The beat is hot…but this song is so unnecessary.

R. Kelly dedicates “Sweet Tooth” to every kind of woman there is. This song is borderline (and by borderline I’m being generous) perverted.

On “Having a Baby”, R. Kelly finds out that he is having a baby. This song sounds very amateurish and Kells sounds like he is struggling to sing. I’m not really feeling this…Jamie Foxx’s “You Still Got It” is a far superior “baby” song.

“Rise Up” a song dedicated to Virginia Tech ( I don’t remember R. Kelly doing a Hurricane Katrina song) closes the album. This song sounds incredibly out of place on an album that is primarily about sex, drugs, and partying…but I guess I can’t knock him for displaying some decency and substance. With that said…this is a greatly inspirational song.

Overall…this album is pure trash. R. Kelly is a 40 year old married (albeit separated) man with kids…so he has absolutely no business singing about these immature topics. For this to be his 13th LP…this should be musically genius. Instead…he took the easy way out and reduced himself to singing ridiculous songs that you would expect from rappers like Snoop Dogg. I’m officially revoking R. Kelly’s “King of R&B” crown until he comes out with some real R&B music. DO NOT BUY THIS ALBUM…I assure it is as terrible as I’ve described.